Truly, Sukanya was more than an ordinary cat. She was unusual in every way.

Sukanya passed away at about 6.15 a.m. on 13th Dec. She embraced death so quietly, bearing all that the body suffered during the last one month that her death left an extraordinary impression in our mind. It was a very rare and noble end. Looking at her lifeless body Swamiji said, “what a sublime death! Anybody must yearn to have such an end.”

Strange that these words came from Swamiji seeing the death of a cat ! But truly, Sukanya was more than an ordinary cat. She was unusual in every way.

Unusual and strange was her arrival in the Ashram. She appeared from the blue one night in the month of June and rubbed her body against everyone else’s in order to draw attention. She showed all the cute gymnastics she knew, to become a pet. She was young and beautiful with black and white fur and deep black eyes. There were already seven kittens and a cat in the Ashram. So, we did not pay any attention to Sukanya for nearly three days, although she went on with her efforts to become owned. On the third day, I discovered her amidst the newspapers in the store room and felt great pity seeing the expression in her eyes- failure to get accepted as a pet and the resulting helplessness. She was accepted.

We do not keep any pet but only give shelter to those animals who arrive on their own seeking refuge. Food and shelter we have never denied. Nutan Swamiji started giving broken rice and biscuits to birds and squirrels every morning, after the chanting session. Slowly the squirrels became familiar and were taking biscuits from his hand! A few even would get on to his lap or climb his body to get the best treat. But we have not felt like making them pets.

Right from the beginning, Sukanya showed her unusual qualities. Unusually fond of human company, she had no other job than to find a lap and sleep there. From one lap to another. And in the Ashram there is no dearth of laps. Very soon we noticed another feature. She became very fond of Satsang. She used to come hearing the Satsang bell and would either share an aasan with a loving devotee or sit on an indulging lap. However, the most remarkable was her love and punctually in attending the morning ‘pushpa-samarpanam’ programme where we all do pranams at Poojya Swamiji’s lotus feet offering flowers and then sit near his feet to listen to his morning message, Prabhāta-raśmiḥ. Unfailingly she had been attending this programme. She would sit on Swamiji’s lap owning the prostrations of Swamiji’s devotees with a regal pose. Those devotees and seekers who have visited the Ashram between mid-June and mid-December have enjoyed this sight. Many considered her to be fortunate and privileged.

Sukanya’s love for this particular programme became all the more conspicuous when we were away in Delhi. During Swamiji’s absence, this programme is held by prostrating at Swamii’s photo kept on his chair and then listening to the earlier recorded cassettes of Prabhāta-raśmiḥ. On our return all the inmates told us, how, though sick and weak, Sukanya used to come only for this programme everyday punctually. She would sit throughout the programme near Swamiji’s chair listening to his recorded message

While in Delhi we got news from the Ashram about Sukanya’s sickness. She was apparently very sad by our departure and had stopped taking food. After the doctor attended to her, she was a little better but was greatly emaciated. Our working girls told us on our return that she was very upset not seeing us. Most of the time she used to sit on my chair silently. One day when she was looking very sad, Kumari asked her, “Sukanya, are you thinking about Amma? It seems she suddenly cried out pathetically. Kumari said that Sukanya used to look miserably at the clothes-drying shed, not finding any gerua clothes there. Before we returned, when our gerua bed-sheets were washed and hung she came running there with great expectation.

When we returned from Delhi, we felt very sad to see her condition. We tried to gauge the sorrow a pet has when the masters go away somewhere. By not taking food, Sukanya had become so weak and thin that she could not even climb on to our laps. But she spoke for a long time with pathetic mews – telling us about all her sufferings. How would the poor cat know that the master would come back within a month or so? For a day or two, Sukanya seemed to get out of her sad mood and started pestering Nutan Swamiji again for her special food. Sukanya was also very fussy and unusual about her food habits and Nutan Swamiji always tried his best to satisfy her needs. She had almost become a vegetarian after she was punished for catching a bird and bringing it inside Swamiji’s room. She was not allowed to enter the building for about two weeks. Our love, she felt, was more valuable than her choicest food! The squirrels grew so much faith in her that they started taking biscuits sitting right in front of Sukanya.

We thought Sukanya was getting better. Perhaps Sukanya herself too! But her body was far too emaciated to digest food anymore. She vomited once or twice and stopped taking food again. She lay either under the firewood oven for heat or under the sun in the front courtyard. She stopped speaking altogether. Whenever we asked her fondly, “Sukanya Ma, will you not take a little food?”, she would look at us with feelingful eyes. Deep and vast was the silence surrounding her.

12th December afternoon, while she was lying near the front tulasi mandapam. Poojya Swamiji looked at her emaciated body and spoke with concern, “Sukanya, if you are having too much of trouble, then leave your body and go.” Within ten minutes Sukanya got up from where she was lying and with slow and dragging steps came near Poojya Swamiji’s chair in the upper verandah. She wanted to jump on to Swamiji’s lap but could not. Swamiji picked her up tenderly and made her sit on his lap, the place which Sukanya loved most. While she was huddled up in the divine lap, Swamiji stroked her and said, “Go Sukanya, you are free to leave your body”.

The whole evening she was in Nutan Swamiji’s lap – the person who has been most affectionate and caring to her. Later she sat on the foot-rest under my cot for some time – the place where she mostly used to lie earlier. At about 8.30 p.m. I saw her dragging herself towards the firewood oven. We saw her at 11.00 p.m., stroked her and gave her some water to drink. She took a few sips and then again there was that silence – the deep, meaningful silence.

When I went to see her at 6.00 in the morning, she had already stretched out her limbs. But she was still breathing. Under that firewood oven itself she breathed her last by about 6.15 a.m.

What a slow and silent death it was! The silence made a deep impression in our minds. She embraced death silently, naturally, without complaints, without desires or expectations, never craving for our attention and at the same time not refusing our concernful attention. On the whole, she was so very graceful while she waited for the end.

During the last days she had left all her bad traits. Generally, she was jealous and possessive. She was jealous of all the little kittens, being afraid of losing her primary position. She used to beat little Padmaavati and Jaambavati without any reason and would not even mix with the others. But during the last days she became so saintly – a mother to all the young kittens, allowing them to sleep huddling her body. It was a feast to our eyes and mind to see little Nandagopal play with her tail, bite her ears and lick her face.

Nutan Swamiji put tulasi leaves and sandal powder on her body while a pit was being made to bury her. He reminded me that Swamiji had once said he would give a gerua dress to Sukanya if she remained a Brahmacharini, hinting that the honour could be given at least now. The he-cat did come and call, but Sukanya consistently refused. Chased by the he-cat she would come running inside and hide under the cots. One day when she did like that, Swamiji asked me what had happened. Hearing the reason he remarked, “If she remains a Brahmacharini I will give her a gerua dress.” Now, when we reminded Swamiji of what he had promised and how Sukanya had successfully remained, a Brahmacharini, Swamiji kept quiet for a few seconds and said, “Yes, she should be given a dress.”

All of us went to the burial place – Swamiji, inmates and the workers. Nutan Swamiji wrapped her in a gerua cloth – a piece from Swamiji’s dhoti – and laid her inside the pit. Chandan powder was sprinkled on her and then she was covered with earth amidst Naama-sankeertana. I lit incense sticks on the grave.

We came back to the Ashram verandah. I was thinking of Sukanya. Just then Swamiji spoke from behind, “Anybody should yearn to have such a departure”!

Photo: One of the Ashram cats sitting on Poojya Swamiji’s lap (not Sukanya) during Pushpa Samarpanam

The most remarkable was her love and punctuality in attending the morning ‘pushpa-samarpanam’ programme where we all do pranams at Poojya Swamiji’s lotus feet offering flowers and then sit near his feet to listen to his morning message, Prabhāta-raśmiḥ. Unfailingly she had been attending this programme. She would sit on Swamiji’s lap owning the prostrations of Swamiji’s devotees with a regal pose.

More from pages of the ashram diary Remaining afloat over Likes and Dislikes 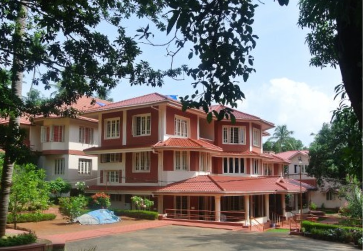